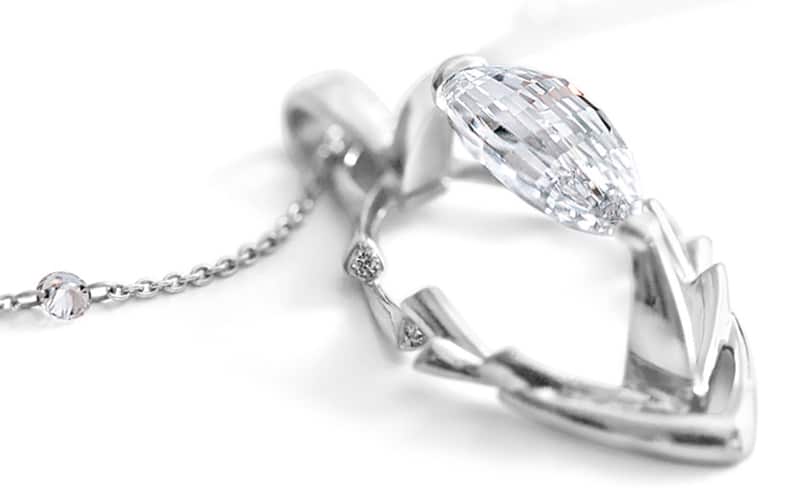 Did you ever wonder what happened to the Esperanza diamond? After a charmed journey (but a failed auction) this national treasure is still available for sale. Let’s revisit her unique story, review what happened and see where things stand today.

Back in 2015 Bobbie (Brooke) Oskarson of Longmont Colorado decided to visit Arkansas’ Crater of Diamonds State Park on a lark, while on vacation with her boyfriend. A popular destination for amateur miners, park visitors may keep any gemstones they find. After 20 minutes of digging in a shaded area known as the pig-pen, Oskarson turned up a long, clear stone. Given its shape and size she presumed it was a piece of quartz.

Park officials later confirmed she’d discovered the fifth-largest diamond ever unearthed there. Weighing 8.52 carats, exceptionally clear and clean, Oskarson chose to name it Esperanza – the Spanish word for Hope – and the name of her niece.

Canadian Diamond Cutter Mike Botha was selected to cut Esperanza. A recipient of the Yves Landry award, Botha worked on the Premier Rose Collection in South Africa and has cut the two largest diamonds ever fashioned in Canada. Botha went to the exceptional measure of transporting his 800-pound diamond-polishing mill from Saskatchewan to Arkansas so that Esperanza could be transformed into a polished diamond near her place of origin. To facilitate this Loyd and Laura Stanley, of Stanley Jewelers in Little Rock, Arkansas, played host to Botha during the process of the diamond’s in-depth analysis, planning and cutting.

When he examined the diamond Botha confirmed the potential Beaty had foreseen, declaring it to be in a class of its own, with the highest clarity and color he’d seen in his life. Scientific testing confirmed his impressions.

The diamond has very little nitrogen in it. In fact it has no nitrogen in it. We put it in a mass-spectrometer and discovered it has less than zero parts per billion. – Mike Botha

The diamond was so absent of nitrogen, in fact, that it was ultimately confirmed to be Type IIa. This placed Esperanza in a category enjoyed by fewer than 2% of all gem-quality diamonds on earth. Known as “Golconda diamonds,” for the region where they were first discovered by the ancient Moguls of India, such specimens enjoy unparalleled prominence among colorless diamonds and command the highest possible values.

One of a kind design

Botha’s goal was to facet the diamond in a way that would remain faithful to its unique outline while ensuring that its extraordinary transparency and colorlessness could be seen from every direction. To achieve this he innovated a teardrop-shaped 147-facet “triolette” configuration.

The complexity of Botha’s diamond design required time to execute. After 180 hours in-process Esperanza was re-introduced to the world as a scintillating 147-facet, 4.60 carat Internally Flawless D-colored Golconda triolette.

No comparable diamond has existed, before or since.

Ian Douglas, Creative Director of The Inspired Collection was selected to design a pendant for Esperanza in a manner that would compliment the flowing, teardrop shape of the finished diamond.

Our ethos is that the diamond should always be integral to the design, not an afterthought. In the case of Esperanza, it couldn’t be any other way. When I design jewelry, I imagine a diamond, floating, unconstrained, revealing its beauty in its entirety. I then design works of art to connect that diamond to the wearer. – Ian Douglas

Jewelry manufacturer Byard F. Brogan brought Douglas’ design to life. And with that, an All-American star was born.

FOX, USA Today, CNN and others had announced the discovery of Esperanza. Other outlets, including Forbes and National Jeweler, reported the steps in her mine-to-market process. She became touted by the Museum of Diamonds as well as Wikipedia’s List of Diamonds. Upon its completion the celebrated Esperanza Triolette Pendant toured the United States for more than a year, appearing at prominent jewelry stores, industry events and museums for exposure to the media, reporters and members of the public. The Los Angeles Times, among others, predicted Esperanza’s value to be $1 million.

Now owned by a partnership, the next step was sale at auction in Boston. The date? March 21, 2017.

If you remember “Winter Storm Stella,” aka the North American Blizzard of 2017, you may remember what happened in the northeast United States on Esperanza’s auction day. The weather created a series of escalating issues, starting with the fact that nobody could physically show up at the auction premises.

Instead of rescheduling it was decided to move forward by telephone. However, auction-phone-lines are more complicated than regular lines. Bidders kept calling the regular lines, complaining that they could not access the auction-lines. A single bidder was able to successfully reach the auction-line before Winter Storm Stella crashed the entire system, terminating the event.

Technically, however, an auction had taken-place. The auctioneers were compelled to release the results, which constituted only a single bid that was under the minimum acceptable figure. The end-result of the blizzard fiasco was a public undervaluing of Esperanza.

In the world of auctions a failure to reach the minimum acceptable figure can happen for a variety of reasons. Such undervaluation can usually be corrected prior to re-auction by demonstrating comparable items have reached higher sales values in prior auctions.

With Esperanza this has proven impossible. There is no sales data for other 4+ carat Internally Flawless D-colored Golconda triolettes because none have ever existed. When “pulling comps” the only search result is a single failed-auction item with no bids reaching the minimum acceptable value.

Where are we now?

Esperanza’s owners decided to step back and wait for an eventual return to prominence. The diamond has been sent to a jewelry designer who has proposed a second setting, incorporating Montana Sapphire to further strengthen her American provenance. Sincere interest has also been expressed by museum principals willing to offer full value for this one-of-a-kind piece. The Coronavirus situation has stalled progress at this moment in time, but the experts involved in her journey remain confident in her unique appeal.

Things have been brought to a standstill by COVID-19 but there has been ongoing awareness and interest. The potential for Esperanza to finish as the most valuable diamond ever found in America is still intact. – Neil Beaty

The good news? If you’re a diamond enthusiast with strong resources Esperanza is still for sale. If you’re interested, or know anyone who may be, you are welcome to contact American Gem Registry President Neil Beaty for information.

Alternately, you can visit Crater of Diamonds State Park yourself. After all, there is nowhere other than Arkansas where you can dig up your own diamond and keep it. Well, aside from outer space – thanks to Obama’s U.S. Space Act, which I covered here. So if you’re seeking a vacation spot, consider a trip to Murfreesboro to chase your diamond dreams. After all, the only difference between a dream and a goal is a plan.

Content used under Fair Use doctrine for non-profit educational purposes.